There’s more to software development than getting a software project delivered to the users’ satisfaction, on time and on budget. (As if that wasn’t enough.) Sometimes someone has to ensure the system lasts for the long term. But when that happens it’s a balancing act: between the project and the product.

The balance between project and product is something that I see again and again in many different forms. Here are some examples from different stages of the project lifecycle… 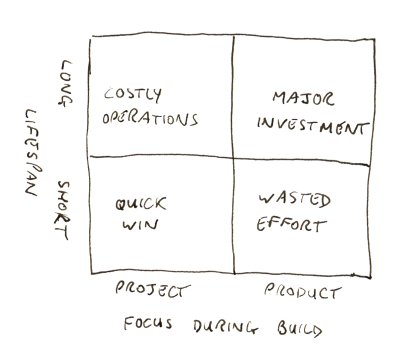 There’s an amusing little spat going on over at Michael CotÃ©’s blog. It’s a fairly traditional tussle of Java versus Ruby (and other scripting tools), in which CotÃ© accuses Java people of being overly concerned with internal architecture, while Ruby (and LAMP and Django) people are more concerned with delivering the goods. But Robert Cooper adds the telling observation that the maintenance of the delivered goods could well be a nightmare if it comes from the scripters, because it often involves a “mish mosh” of technologies with non-standard dependencies.

Robert’s point, more generally, is that getting the application out the door is only part of what a software team needs to worry about, and the choice of tools has a bearing on life beyond the project end.

Having an internal software team is a wonderful thing. Among other things you can build up a huge amount of expertise, both technical and business-specific, which helps everything go much more smoothly. But sometimes bringing in consultants from out the outside has a benefit, too, and beyond mere extra bodies. Consultants get to see many different projects, technologies, businesses and people over a very short time, and they bring this accumulated expertise with them.

Mixing internal and external people like this can work really well. In terms of ideas, external people can bring ideas and propose directions that might otherwise not have been considered. Internal people are all too aware of the long term implications of these ideas in their organisation and can stop the crazier ones before they get too far. In terms of making the best use of time, external people are often particularly driven by project deadlines, perhaps because they’re often only employed for projects, so it’s all they ever know. Internal people can see the time spent now but also have a very good feel for time likely to be spent in the future, so can determine better when additional time within a project is actually investment for the future.

Sometimes work is outsourced entirely to external teams. Sometimes work is undertaken entirely by internal people. When the two kinds of people mix there is creative conflict, and the balance between project and product is tested.

I once worked on a six month project with a big bang release. At the end of the project was a single release which took three days. That wasn’t three days of integration, testing and launch. That was three days from the point when the software was entirely ready for the end users, to the point where it was actually available to those users.

In terms of the project this was fine: on the scale of a six month project, a three day release is negligible. But when we came to release 1.0.1 and release 1.0.2 it was a bit excessive, and by release 1.0.16 it was actually a serious business issue.

There are many lessons to be learnt from this, but one is that we had erred towards the project too much and our lack of consideration for the product caused us problems very, very quickly.

It’s too easy to forget about the product in the rush to the end of the project. At one time I realised I was so negligent in this area I stuck a large message on my monitor in 36 point font:

…and how will that be maintained?

Balancing project versus product affects everything from who you involve at the start through to how you hit your deadlines and on to how it affects the rest of your working life (and possibly your non-working life if you find yourself on call). There isn’t a one-size-fits-all answer, but at least if we are aware of the tension between the project and product we have a better chance of making more informed decisions.