For example, I spend a lot of my time trying to maximise our efficiency. Maybe this is because I’m a techie kind of person; I see the same motivation among the project managers, developers, and others in our software team. But very often we face the prospect of having to start a piece of work without having all the details available to finish the job. Maybe we’re waiting for information from a third party, maybe the visual design isn’t complete, maybe a decision still needs to be made by people elsewhere in the organisation. Whatever it is, we’re faced with the prospect of starting a piece of work knowing that we may not be able to complete it without an interruption. 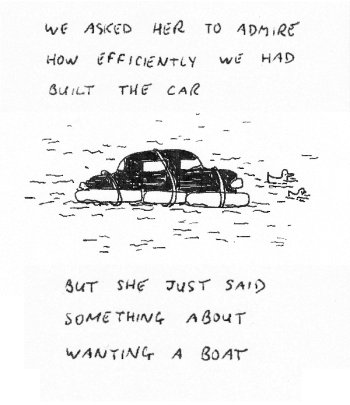 This is clearly going to be frustrating to my techie, left-brained approach to life. It undermines my efforts to be efficient, organised, anally retentive, and generally less fun at parties.

I know it would frustrate others, too. Agile advocate Simon Baker recently railled against organisations that didn’t make product owners sufficiently available to provide the relevant feedback and information. He wrote

If the project is vital to the business, then the company can always find a way to provide a full-time and colocated Product Owner. If they say they can’t, it really means they won’t. Quite simply, they’re not prepared to do what is necessary to achieve it, and frankly, if they’re not going to take the project seriously why should you?

Ouch. I’ve felt the pain that Simon felt when he wrote those words, but we shouldn’t rush to make harsh judgements on business experts who are facing pressures of their own.

We software people can talk all we want about our methodologies, but sometimes we need to wake up to the cold, wet slap of reality. The fact is software development is not the be-all and end-all of most businesses — far less is efficient software development methodologies. Sometimes it’s more important to be working on the most important thing inefficiently than it is to be working on the second-most important thing efficiently.

At Guardian Unlimited we motivate ourselves by measuring velocity — the number of units of work we complete in a given period. But if we’re not careful we can focus on that too much and be in danger of missing the bigger picture.

Some time ago I was speaking to one of our internal customers, explaining why developers pushed back on incomplete specifications, and the motivation of being efficient and achieving target velocity. “I don’t give a stuff about velocity,” she said, “I just want the thing built.” The point is well taken. Sometimes we need to remember what the word “customer” means.