At the weekend the Guardian website went through one of the most significant transformations in its history: we moved our news, politics and Observer content into the new design and new content management system, and we simultaneously launched a lot of new functionality, both internal and external.

There’s an introduction and discussion on the more public-facing aspects of this, kicked off by Emily Bell. For my part, I want to talk briefly about one of the most remarkable behind-the-scenes aspects of it: how we got the weekend launch to go so incredibly smoothly.

The secret is that the weekend’s work was only the final step after a great many before it, all of which were safely out of the way before the weekend…

The actual software was released some weeks ago, in early January. This means that by the time of the launch it had been in use for some time, almost all the lines of code having been executed several hundred (and in some cases thousand) times already, in the production environment.

Even that January release was only an enhancement of previous releases which have been going out fairly quietly over the previous few months. The latest one included new internal tools, and updates to tools, to support some of the new features that are visible today. 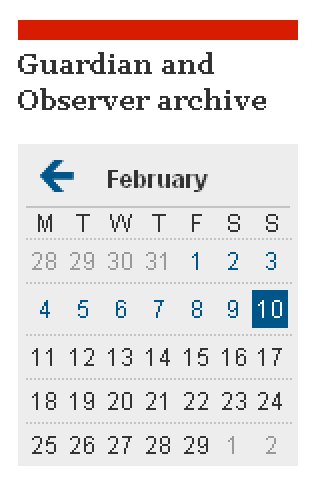 Meanwhile editors, subeditors and production staff have had to learn to use those tools. They’ve been using them to migrate a lot of the older content into the new-format pages. You might think that could be done by machine, but that’s not the case. Since we’re also changing our information architecture — adding a lot of semantic structure where previously there was only presentational information — it takes an informed human being to know how to convert an older page into its newer format. A real person is needed to understand what a piece of content is really about, and what it isn’t about but merely mentions in passing. We also need people to look at the new keyword pages (for example, the one on immigration and asylum, or the page on Kosovo), which are populated mostly automatically, and for them to highlight the most important content: the most important content won’t necessarily be the newest.

This work had been going on for many weeks before the weekend launch. The January software release brought in some tools refinements to help them tidy up final loose ends (and no doubt some more tidying will happen over the next couple of weeks).

You can see from this that it’s about much more than mere software. The software enables people to do the editorial work, and the editorial work has been going on for some considerable time. Everything they’ve done has also been tested and previewed, which allows them to see what our external users would see were it to go live. Again, this exercises the software fully, but only within the internal network, before it’s exposed to the outside world.

The work for the weekend launch is mainly running a lot of database scripts to make various new URLs live and decommission old ones. The reason this is such a huge launch is that there’s over ten years’ worth of news content to expose, as well as new functionality and designs.

We couldn’t trust the scripts to work first time (of course), so we spent a lot of time copying the production content into a safe environment, and rehearsing the process there, with real data. We needed to be sure not just it would work, but also how long it would take (considering any hardware differences), and change the scripts and process accordingly.

Finally, after all the rehearsals, the real deal. The work to run the database scripts and raise the curtain on various features ran over Saturday and Sunday, but it was calm enough and organised enough that the team needed to work only slightly extended working days.

So the big launch was a culmination of a huge amount of effort, and the weekend work was after an awful lot of practice. There were a couple of sticky moments, but nothing the team couldn’t recover from in a few minutes. As one of the developers remarked towards the end of Sunday: “The fact that today’s been really tedious is a good thing.”

What we can see now includes

We’ll be ironing out a few things over the next few days, but everything’s gone to plan for now. And then, as Emily says, there’s still sport, arts, life and style, and education to do.

One thought on “Guardian.co.uk: Steps to a smooth launch”