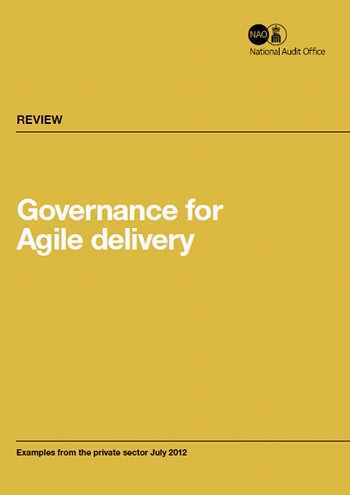 Last week I was pointed to a report by National Audit Office called Governance for Agile delivery. It’s a really terrific piece of writing and I’d recommend it to anyone who wants to understand the concept of agile governance, or who wants to help others understand it.

Aside from anything else it’s good to see this stuff written clearly, with a focus on higher level issues (governance) which often get overlooked or underappreciated. For example, it contains a good description of what governance is, just to make sure everyone is talking about the same thing:

Governance for ICT is for senior management to gain and give assurance that investment generates value to the business and reduce the risk of bad outcomes.

It also has a whole section on what agile governance should look like (as distinct from governance of other kinds of activity), which is broken into four principles.

The NAO exploited their position of authority to bring together a lot of useful case studies from senior people in significant organisations: BT, Simply Business, Innocent Drinks, and others. And in case you think one report is a mere drop in the ocean there’s a handy chart in the appendix showing a large portion of that ocean of reports, and this document’s place within it.

However, I was perplexed initially as why the report was written. After all, much of this stuff is available elsewhere and this is hardly a new subject. But I then realised that the NAO is really part of making a culture change; the fact that this comes from the NAO means certain people within the public sector will be forced to take note of what’s coming down the line and get to grips with it. It’s geared towards that kind of audience: there are selected quotes from senior goverment and civil service figures, not just private industry, which makes it more relevant; the case studies are from significant people in nationally-significant companies, not just cool digital companies; and the language is straightforward and jargon-free while still tailored to its readership (e.g. the term ICT is probably not common parlance outside government). It’s rather fascinating to watch culture change in action.

I was slightly amused by the discussion of the place of auditing within an agile framework. I wasn’t sure how much of that was a message to people being audited by the NAO, and how much of it was a message to people in the NAO trying to work out their role within these new-style projects (or indeed government officers questioning the NAO’s role). It’s certainly clear from the text that meaningful auditing is a very different beast in this new-fangled agile world — for example, there’s a lot of talk about evaluating team dynamics and behaviour, which I’m sure is not what happens in a typical NAO I(C)T audit.

But even outside the governmental context this is a really useful document. If you’re curious about governance of agile projects, or if you know someone who should be, then this is an accessible and valuable read.