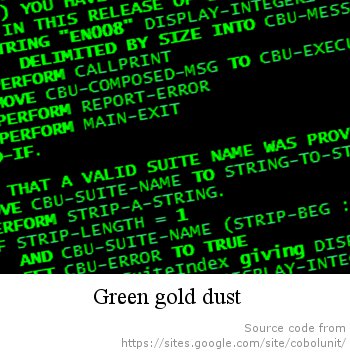 A couple of events today dovetailed, and provided some food for thought. As the day was beginning, and before the office really started to fill, I was speaking to a developer who was enthusing about testing and refactoring old code. After he talked about incrementally bringing out the intent of the code he rounded off with “…and then you get to the real gold dust, which is the business process”. I liked that picture, and it stuck in my mind. An hour or so later I found myself sitting with another developer helping him put unit tests around COBOL code. By today’s standards COBOL is astonishingly clunky, and it was near-impossible to see the business process for all the low-level mechanics that filled the screen. And yet COBOL declares itself to be the Common Business-Oriented Language. In theory I should have seen a screen full of gold dust.

In case you’re wondering what COBOL looks like, here’s an excerpt of a program which unpacks a CSV file:

We could laugh today at how far COBOL is from expressing business ideas, but that would be foolish. I’m confident its inventors were smarter than me; perhaps they were even smarter you. The truth is that the technologies we consider today to elevate and express business processes will themselves be smirked at in decades to come. This is what the University of Limerick says about COBOL on its computer science course:

One of the design goals for COBOL was to make it possible for non-programmers such as supervisors, managers and users, to read and understand COBOL code. […] It encourages a simple straightforward programming style. Curiously enough though, despite its limitations, COBOL has proven itself to be well suited to its targeted problem domain (business computing).

If you don’t believe that now be warned that technologists of the future may not believe your justification of your favourite business-oriented technology today. COBOL was created at a time when technology played a different role in business, and when business people’s relationship with technology was also different. We can safely assume that will change again. The concerns our technologies put front and centre today will melt away in years to come.