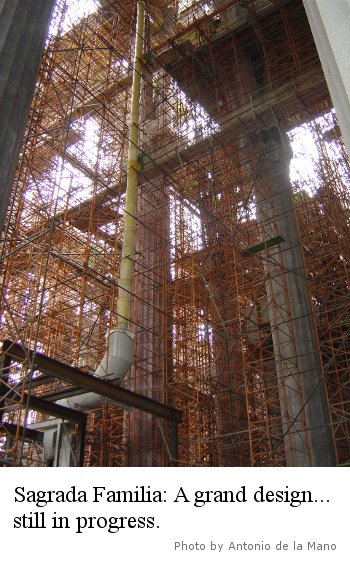 The National Audit Office’s “Early progress” report on Universal Credit isn’t hot news, but it’s a document anyone should refer to frequently if they’re involved with anything but the most trivial of technology projects. It addresses a difficult subject in plain English, and it exposes weaknesses any of us may be subject to. Here is one lesson…

At one point, the Department of Work and Pensions made a proposal for hardware and network infrastructure:

The proposal was for a highly secure, strategic infrastructure, capable of supporting national roll-out and other departmental reform programmes at a cost of £55 million.

This seems like it might be a good idea. After all, Universal Credit will eventually need to be rolled out nationally, and if that network supports other programmes, too, then it’s an extra win. But there is a mantra usually applied to writing software: you aren’t gonna need it, aka YAGNI. And that lesson applies at strategic and governance levels, too. If the capability of the network isn’t needed for near-term functionality, before it’s been tested through real world usage, then it probably isn’t a great investment. Plus, there may be alternatives. And £55m is… y’know… a lot of money, even for a secure network.

The Cabinet Office rejected this on the grounds that the Department did not have a clear strategic plan more widely, and their infrastructure proposal was unnecessarily elaborate and offered poor value for money for the delivery of [the near-term goal of the] pathfinder.

It’s too tempting to over-engineer (developers) or kick off grand projects to be your legacy (politicians and business execs alike). Can you guess how much a less elaborate proposal might be? We continue…

In response, the Department changed its proposed infrastructure to the minimum necessary to support the pathfinder. The Cabinet Office accepted this proposed short-term solution at a cost of £2 million.

Rarely are projects reviewed so clearly; even more rarely are the lessons made available to us all. We are all subject to big dreams and grand designs. But here is one quantified example of how much that could have cost: From £55m down to £2m.

This must be a confusing world for some of those in government. On the one hand a proposal for a generalised platform is shot down by the Cabinet Office, whose Digital Service arm is tasked with driving a new, more Agile approach. On the other hand the new approach to government IT has a lot of noise and fanfare around so-called common platforms. “Which way do you want it?” I imagine them screaming.

Meanwhile let us be grateful the £55m didn’t get spent. And let us consider how many times we may fall into the same trap. Most likely on a smaller scale, of course.