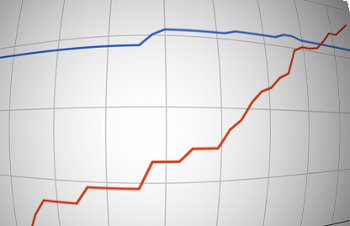 Burn-up charts are very powerful—they show progress against reality very clearly. A colleague once told me that his boss much preferred the burn-up charts he saw than the more traditional reports other managers gave him, because the burn-up charts gave him confidence based on hard data, whereas other reports were more vague and had milestones based on hope. They provided a solid means of assurance.

But burn-up charts place a responsibility on the team. They require a team to think about the work ahead of them as well as recording the work done. This means they have to spend some time considering distant requirements that are presently unclear and will most likely change. The team may not like this—even though we say we expect those estimates to change—but the team’s guesses at this will always be more useful anyone else’s.

Putting this on display, and keeping it updated, demonstrates accountability. A couple of weeks ago I wrote that a team must be verifiable if it is to be trusted. The accountability of a visible burn-up chart is one way to be verifiable—and hence to build trust.

I often encounter teams which don’t want to demonstrate their progress in something like a burn-up chart. They aren’t always bad, and they don’t always have something to hide. Perhaps they just don’t understand what it’s like to be one of the senior stakeholders who is ultimately called to account for the delivery of their work—the CEO who has to explain poor performance to the owners of the business, the account manager who has to face the client that’s been bankrolling the delivery team, IT manager who has to explain to her boss why she’s spent 90% of the budget with nothing to show. Maybe they just need to understand what it’s like to be in someone else’s shoes.

Those senior people who feel the heat when things don’t go to plan are much more willing to help the teams early if there is a strong trust relationship there. Something like a burn-up chart can help greatly develop that trust.