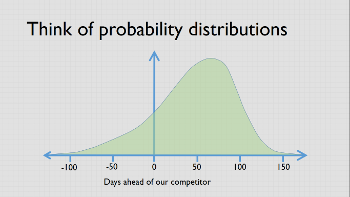 When I try to think constructively about managing risk and uncertainty, as well as trying to think about variability, I also find it useful to think about probability distributions.

The image here is an example of a probability distribution I used in a discussion last week with the lovely people at FreeAgent. (You can see the full slide pack at Speakerdeck). It derives from a concern which is presented initially as a black and white risk of “our competitor will launch before us”. The variability is in how long the gap is between our two launches. It’s measured in “days we’re ahead of them”. So a positive number means we launch first, and a negative number means they launch first.

Just considering the variability can be enough to stimulate some constructive thinking, but imagining a probability distribution can help further by inviting us to consider what the more (and less) likely outcomes are. A hump in the curve indicates it’s more likely; a thinness indicates it’s less likely. This curve says we’re much more likely to be 25 to 100 days ahead of our competitor, than for them to beat us by 25 days or more.

The y-axis on a probability distribution isn’t very meaningful; the important thing is the area under the curve. Our starting point is to say the total area represents 100%. Then we work from that. Due to this curve stretching out more to the left we can see that the mid-way point—the point where the area is equal on either side—is roughly at the 40 day mark. This means we think there’s a 50% chance we’ll get to a launch at least 40 days ahead of our competitor. It looks like the area under the curve with the negative numbers (to the left of the zero mark) is about 25% of the whole area, which means we think there’s a 25% chance of our competitor getting to market ahead of us (although that may be by anything from half a second to 100 days or more).

A probability curve can be any shape. I would guess that acquiring a company is something that can either go really well or really badly, but is unlikely to be middling. So that would suggest a curve that has a hump at either end, but a thinness in the middle. How large the relative humps are is open to discussion.

Of course, just because we draw a curve it doesn’t follow that it’s true. Just thinking through it, or sketching something out roughly by ourselves or with a colleague, is what’s valuable. It helps us discuss and understand what is and isn’t likely to happen, without resorting to black and white rhetoric, and this potentially leads us to constructive action.