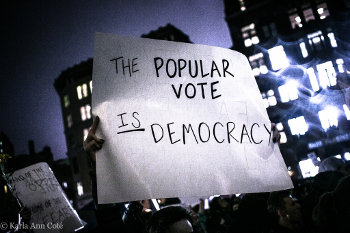 Last week Donald Trump won the US election. We are told this was a surprise (see the Wall Street Journal, Bloomberg and NBC, for example), although I find this odd. Nigh-on 50% of the US voters voted for Donald Trump, and fivethirtyeight.com gave him a 1 in 3 chance of winning, which is pretty significant.

Why was this a surprise, and what can we learn for the future? It seems the evidence was all around us that while this may not have been a certainty, it should not have been a surprise. Perhaps so many of us were blinded by the idea of not wanting it to happen, that we refused to accept the available evidence with the objectivity needed.

The lesson I learn from this is that we need to be better at listening to people. If we want to build something that’s meaningful to people (such as a political campaign, or a product) we need to look for those outside our usual circles and find out what they see, think and feel. There’s no value in being judgemental; there is value in listening openly and understanding. If we can see the world from others’ point of view then we can speak to them and address their needs more effectively.

This is true also on an individual basis. If we’re working with a colleague who we disagree with then it’s important to understand their point of view. What do they see? What do they hear? How do they interpret that? What in their experience causes them to interpret things that way? Even if their interpretation seems wrong to us, we cannot take away what they have experienced. They will stick to their interpretation until we can offer a more convincing one.

I’ve worked with product companies before who have tried to listen to their users but too easily spoke to their power users, who were a small group and unrepresentative of their whole audience. This is common, because it’s the power users who are closest to those building the product. But the result is that those companies ended up building products which were too sophisticated for most of their audience; they were frequently bested by their competitors. Reaching out to ordinary users is harder, but the value is much greater.

Of course, the product problem is easier to solve than a national political one. Earlier I was watching an interview with Dean Baquet, editor of the New York Times. This was recorded days before Trump’s victory, and there he said “I think the story we missed […] was just how much anger there was in the country […] and I think I come away from that with lessons about how to cover the country going forward.” There is someone recognising that they need to be better at listening.