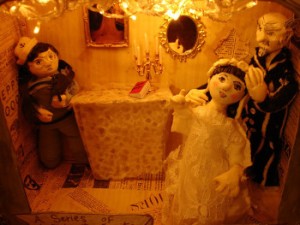 My daughter and I are currently reading Lemony Snicket’s very entertaining “Who Could That Be At This Hour?”, a book in the series of “All The Wrong Questions”. And there is a constant refrain I think is very useful: The map is not the territory.

The book tells the story of Mr Snicket’s apprenticeship as a young boy, and an adventure involving the theft of a statue, apparently while he also learns to not ask all the wrong questions. During this—certainly in the early chapters we’ve read so far—we are reminded often that the map is not the territory.

This phrase reminds me of various conversations I’ve had with project stakeholders who have praised one project or another on the strength of the fine documentation. Such a project might have a clear plan, or a comprehensive financial summary, or very standardised reports. These are fine things, but not reasons to believe a project is running well. I wonder how the stakeholders know the project is going well (do they think the reports are sufficient?) and suggest that they would really want to go see for yourself. Now I will also use the phrase “the map is not the territory”.

Mistaking nice documentation for actual progress is tempting for anyone who wants to avoid getting their hands dirty. But it’s not a good mistake to make, and can easily lead to a series of unfortunate events.