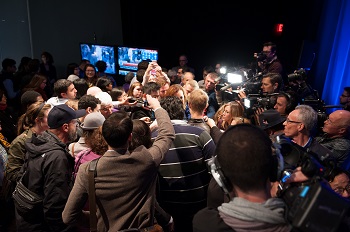 I’ve said before that the word “maturity” raises my hackles, and in particular when people talk about their organisation needing to be “mature”. This is not the only word that has this effect on me. I’ve written before about “culture” and the phrase “best practice”.

As with “best practice” (and sometimes with “culture”) there is a slightly veiled insult. It suggests the organistion is immature, that it needs to grow up. And because maturity seems to be an intangible thing it can be very difficult to question or argue against.

Last week I came across the phrase again, this time in public. The phone maker OnePlus (which happens to make the phone I use) was in the media for making a very public mistake: it announced that it would produce the world’s first handset with Qualcomm’s Snapdragon 855 chipset. The CEO announced it on-stage, spokespeople said it in interviews, and it was announced on Twitter. And then they had to roll it back.

Writing about this in Engadget, Chris Valezco wrote:

…the very public nature of the error also calls into question OnePlus’s overall maturity as a company.

This got me thinking about what it means to be “mature”. Like culture, we need to be able to see maturity in tangible forms, otherwise it’s meaningless. Given this particular example, the implication is that it results in fewer large public mistakes. So within the company, does maturity mean being less brash? Does it mean more checks and balances in the Marketing Department, or more widely? That in turn would surely slow things down. Does maturity mean slowing down?

The need to pin this down to something tangible is much like the process for measuring seemingly intanglible things. And—also like that process—I suspect it depends on context.

For example, imagine an organisation that is very bureaucratic, where things take ages to get approved, and people are afraid to make mistakes. The organisation sees competitors racing ahead. One day the CEO declares “We mustn’t have a blame culture, we must trust each other more and allow ourselves and each other to make mistakes. Trusting each other and forgiving mistakes is a sign of maturity.” This seems very plausible, and yet this CEO’s definition of maturity seems to be the polar opposite what we might define for OnePlus.

I don’t think it’s a bad thing to talk about maturity. But it is a very slippery idea, and if we are to make good use of it as we evolve our organisations then we need to be very clear about what we do, and don’t, mean.