When I listen to three-way interviews on news programmes I’m often struck by how unconstructive they are. This is particularly apparent when the item is about a split within a single organisation and the interviewees represent different sides of that split. At the end of the interview the two representatives are no closer together. I contrast this with my own experience in organisations, where people with opposing viewpoints generally do come together and find a practical way forward.

Of course, there are some very obvious reasons for this. News programmes benefit most from exposing differences rather than reconciling them, and they impose an extreme limit on discussion time, whereas on the ground inside organisations we have much more time to bring people together. And in most organisations there is usually someone senior enough to make a final decision that people are generally happy enough with. Still, after many of these interviews, I am left asking myself, “How can these people come back together and move forward?” 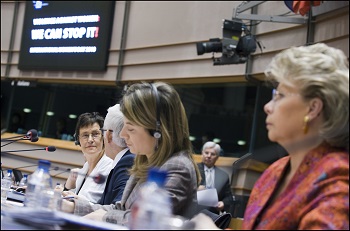 In both situations (public newsworthy splits and internal organisational differences) an essential ingredient for reconciliation is that both parties agree on the goal. That’s certainly worth checking before progressing further, and if there isn’t obvious agreeement then we need to adjust our view of what the goal is.

For example, before the current UK general election was called there wasn’t unanimous agreement within the Labour party about whether to agree to one. Two factions might disagree on the goal “We want a general election now,” but they might agree on the higher level goal of “We want Jeremy Corbyn to be prime minister,” or (failing that), “We want our party to win a majority in the next general election.”

Once a common goal is agreed we should look at the strategy that each side has in mind for achieving that goal. This is usually where the biggest differences are found. Both sides believe their strategy is the best one to achieve the same goal, so why do they differ? The source of the differences are to be found in the beliefs and assumptions underlying the strategies, and these are usually unstated or (at best) barely stated.

Once we start discussing the underlying beliefs and assumptions we can make further progress. These are typically based on what people see in the world, and their past experiences. We can’t change what people have seen, but we can question what we infer from those experiences. In particular, one experience for one person may lead to a particular belief about how to approach a particular problem. But a more objective examination should reveal that the proposed approach is does not guarantee success. We can ask how likely success is with that approach. And when we disagree on the likelihood we can start taking that apart and examining how that estimated figure is constructed.

Let’s take a simple example. A few weeks ago Jeremy Corbyn’s party supporters said he had a good chance of winning a general election. I don’t think any were saying it was guaranteed, but they were very bullish. They pointed to his unexpectedly good showing in the 2017 election, and that he achieved that starting from a similarly poor position in the opinion polls. They might therefore rate his chance of success at 65%. The sceptics in the Labour Party would have been more pessimistic, and even with that evidence from 2017 might have rated his success at 25%. We would have to ask the sceptics why they produce a different estimate given the same evidence, and they would no doubt present additional evidence. They might have said Corbyn’s win in 2017 was partly due to Theresa May’s poor public performances, and that the current prime minister is stronger in that respect; they might have pointed to the strength of the Brexit Party in marginal seats; they might have presented other evidence.

After we have surfaced the underlying factors our task is to assess their contributing impact. We should really also ask how probabilities vary for different impacts. Again, we are likely to differ on our assessments, but (a) those differences are likely to be less than our initial differences, and (b) we can often test them (for example with opinion polls, or asking independent experts). We are starting to be more objective and more scientific.

Now we have a much better picture of the mental landscape in which our two sides are operating, and we can start finding a constructive way forward, which is likely to be different to either of those we started with. Often we will find this way forward through plain discussion, but if we are sufficiently disciplined or interested then we can be more formal and use statistical models or game theory.

So when people are fundamentally on the same side we can exploit that desire for a common goal. We can unpack potential strategies, examine the parts, and assess impacts and likelihoods. Our approach to finding an appropriate way forward becomes more objective and scientific, and less personal.

Photo from the European Parliament