One of my minor frustrations with political discussion is that it’s almost entirely word-based. Radio works well for political discussion; television is the same as radio, but you get to see people sitting down at the same time. Perhaps this is because politics was once people standing on soap boxes speaking to crowds.

I’d really like to see a politician interviewed with a marker pen and a flipchart. I’d to see them draw out some of their ideas—how does this thing interact with that thing? Where does this group of people sit within that? What are the forces at work, between these different issues?

Until then, here’s something that I will explain with words, but also a diagram: making a point.

I had to make a forceful point with someone the other day, but the purpose of the conversation was not to make my point, it was to get them to change their behaviour. And I had to push my point so far, but not too far. 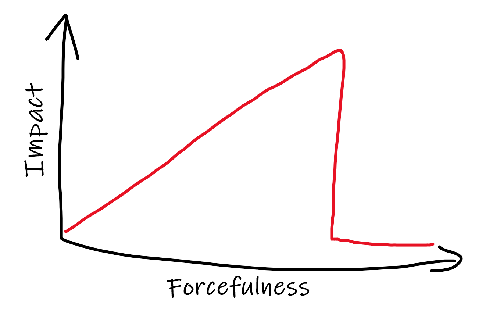 The more forceful I was, the more I would be able to change their behaviour. But if I went too far they would just reject what I was saying and my impact would be close to zero.

Of course, reality is more complicated than the diagram shows. It depends on them, and it depends on the issue, and many issues require (and allow) several conversations, not just one. Most issues require persuasion rather than forcefulness, of course, but this was a rare instance of the latter. Still, I think the diagram conveys the core idea quite quickly and simply, and when I thought about the conversation afterwards that’s how I pictured the challenge.

I’d like to see more quick diagrams in everyday life. We might all see things in a slightly different way.